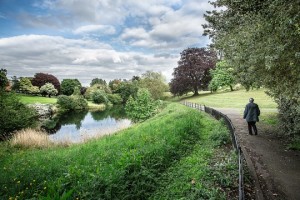 The Phoenix Park at 707 hectares (1752 acres) is one of the largest enclosed recreational spaces within any European capital city.  The Phoenix Park was established in 1662 by one of Ireland’s most illustrious viceroys, James Butler, Duke of Ormond, on behalf of King Charles II.  Conceived as a Royal deer park, it originally included the demesne of Kilmainham Priory south of the River Liffey, but with the building of the Royal Hospital at Kilmainham, which commenced in 1680, the Park was reduced to its present size, all of which is now north of the river.  Shortly after the Park’s acquisition it was enclosed within a stone wall, which was initially poorly constructed.  Subsequent wall repair and new build were necessary as the Park’s size and boundaries were adjusted and realigned.  In 1668, Marcus Trevor, Viscount Dungannon, was appointed Ranger who, with two other keepers, was responsible for the deer, managing the Park’s enclosures and newly formed plantations.

About 30% of the Phoenix Park is covered by trees, which are mainly broadleaf parkland species such as oak, ash, lime, beech, sycamore and horsechestnut.  A more ornamental selection of trees is grown in the various enclosures.  A herd of  Fallow Deer has lived in the Park since the 1660’s when they were introduced by the Duke of Ormond.  The Phoenix Park is a sanctuary for many mammals and birds and a wide range of wildlife habitats are to be found in the park.  One such  area is the Furry Glen, which is managed as a conservation area.

Áras an Uachtaráin, the residence of the President of Ireland dates from 1750 and is located in the centre of the park adjacent to the United States Ambassador’s residence, which was built in 1774.  Many other historic buildings and monuments are located in the Park. 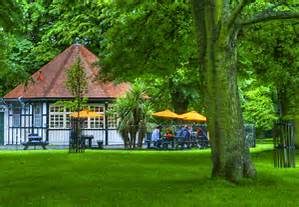 The Victorian People’s Flower Gardens located close to the Parkgate Street entrance, comprise an area of  9 hectares (22 acres) and, were re-opened in 1864.  These gardens were initially established in 1840 as the Promenade Grounds.  They provide an opportunity to display Victorian horticulture at its best.  Ornamental lakes, children’s playground, picnic area and Victorian bedding schemes are just some of the attractions.  The opening hours are 8am till dusk.  Closing times vary during the year.

Ashtown Demesne accessed off the Phoenix roundabout on Chesterfield Avenue, has numerous attractions for young and old alike.  Those include Ashtown Castle, a two and a half acre Victorian Kitchen Walled Garden (under restoration), Phoenix Park Visitor Centre, Phoenix Cafe (Ph. 01-6770090), toilets, car and coach parking, woodland walks, picnic area and new universal access playground.  The Phoenix Park Visitor Centre has a historical interpretation and an audio-visual presentation of the Phoenix Park throughout the ages.  For details or bookings the centre can be contacted on 01 677 0095 or via email at phoenixparkvisitorcentre@opw.ie

The Victorian Tea Rooms (Ph. 01-6719376) serves teas and lunches with an outdoor picnic area.  Situated between the Band Hollow and Dublin Zoo.  Toilets are located here.  The Band Hollow is host to summer musical performances.  Check OPW office for schedule.